The origin of e-mail SPAM 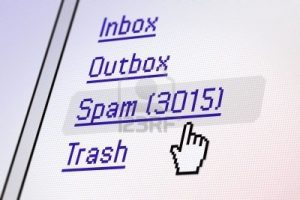 Around 40 years ago the fax machine became commonplace in most businesses. It was a shiny new electronic toy and everyone wanted to play with it. It became like gaming addiction. However, there wasn’t enough actual business use for faxing yet so people started sending joke lists around. They would get re-faxed until the pring became illegible. You would send out a joke list from your machine and a few days later would get t back from someone you never heard of. One approach to sending joke lists around was to put your company name and sales blurb in the middle of the page. It became a sales tool. As these fax machine got ubiquitous, the spam went from sending joke lists to sending ads for toner, paper, and office supplies. That was actually good targeted marketing, and it produced results until it got completely out of control.

The scam of the day back then was to fax over an invoice for toner paper. Often, the company would pay the invoice because they just assumed it was valid. After all, they did use fax paper and the invoice just went into the accounts payable pile. The more honest spammers would actually ship out some paper, but it was really way overpriced. The real jerks would just cash the checks and be gone. Some companies continued to pay monthly invoices and the scam worked for years.

At the time, faxes were printed on thermal paper and receiving a fax actually cost the business money. There was no way to stop unwanted faxes or to block anyone. Then, there was the 1980’s version of a malicious attack: Fax 500 blank pages to a competitor and use up all their thermal paper. That was like a system crash because it required a drive to the office supply store for more paper. The boss was upset that he couldn’t control this new technology. It was costing him money.

Then personal computers e-mail arrived, followed by e-mail spam. As the use of e-mail grew the spam got more overbearing. However, at least with e-mail, the receiver didn’t have to pay for the paper and toner. Also, there has been a steady development in spam fighting tools for e-mail. There’s still no spam tool for faxes, other than the CAN-Spam Act.

Now, at least, you can use a digital fax service and receive faxes in your e-mail. There’s still some spam, but at least it’s not getting automatically printed out. And faxing documents is still a useful tool. They are very common in the real estate industry for sending a signature page or contract modification request. Sure, the document could be scanned, saved and e-mailed, but a quick fax is usually more efficient.

The demise of faxing has been predicted many, many times. FedEx was definitely going to kill it. Then e-mail would surely do it. Now, personal scanning machines are going to end it. However, just like spam, faxing still seems to be a base technology that is not going away anytime soon – just like spam.

So, let’s blame the current spam issues on fax machines and some opportunistic fax paper salesmen. It started as a great, targeted marketing campaign, but evolved into a mess of sales pitches and malware attacks.

Successful marketing requires a careful balance and the use of many different kinds of media. No matter what kind of business you own, you probabl ...

4 Hidden Office Expenses that Are Costing Your Small Business

All businesses have expenses, it is how the business stays open and makes money. As they say, to make money, you have to be willing and ready to s ...

5 Top Tips For Reducing Communications Costs in Your Business

If you run your own business, you’ll understand that managing overheads can be a constant battle. If you’re looking to cut costs, you likely can’t ...

The Key Reasons Why Your Email Marketing Campaign is Failing

The email is one of the oldest and most ignored tools of communication for both individuals and businesses. Many so-called marketing experts w ...