Yes, Smoking Cigarettes Really is That Bad but You Can Quit 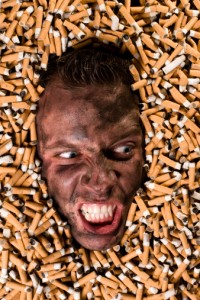 Just about everyone knows that smoking is extremely bad for your health. They also know that smoking can be bad for people who are around them. However, not as many people realize just how bad smoking can be for their loved ones. For example, a study conducted by Tobacco Control had two interesting conclusions about smokers and their pets.

The first was exactly what impact smoking can have on pets. According to research, skin diseases, lung cancers, eye diseases and lymph gland cancers are just a few examples of what indoor cigarette smoke can do to a cat or dog.

The second major finding of this study was that nearly 30% of the people who participated in the survey component of this research didn’t realize how bad smoking was for pets. However, those people said that knowing could play a major role in their decision to quit.

Whether you want to quit for yourself, a family member, your pet or a combination of people, it’s normal to feel like you’re facing an impossible task. While you’re going to have plenty of ups and downs throughout the process of quitting traditional cigarettes, that doesn’t mean you can’t be successful. In fact, there are quite a few strategies you can employ to reach your goal. Let’s go over some of the approaches that will maximize your chances of success:

Multiple studies have found that different forms of exercise can significantly boost your odds of successfully quitting. If you can’t remember the last time you went jogging or hit the gym, don’t think that’s going to hold you back from quitting. Instead, you can start with something very simple.

The reason beginning to utilize physical activity to help you quit doesn’t have to be hard is because research from the University of Exeter found that taking a walk for as little as five minutes can help someone avoid the temptation to light up.

Once you start getting more active, you can take advantage of the findings of a University of Western Ontario study. This study concluded that regular exercise plays a major role in ending smoking for good. Finally, if you want to look great and stop smoking, a study from The Miriam Hospital’s Centers for Behavioral and Preventive Medicine discovered that resistance exercise double people’s chances of successfully putting an end to smoking.

Don’t Underestimate the Power of Habit

There’s no doubt that cigarettes are chemically addictive. That being said, that’s not the only reason people get hooked on them. A big part of cigarettes’ appeal is the ritual that goes along with smoking them. Whether they’re used for a break at work or during a creative process like writing, plenty of smokers absolutely love the feeling of holding a cigarette in their hand and taking drags from it.

Since getting away from traditional cigarettes can be significantly easier when you don’t have to think about enjoying that sensation for the last time ever, many former smokers are turning to e-cigarettes like the ones offered by Zemocigs.com. What makes this form of smoking so much better is there’s no actual burning that takes place. So instead of inhaling actual smoke, you simply take in vapor.

Another factor that has led to such a rapid increase in e-cigarettes’ popularity is while they still provide individuals with the experience of smoking, there’s no secondhand smoke to potentially harm others. That means no disturbing others if you want to smoke in public, as well as no worries about hurting your pets if you’re smoking at home.

Many people choose to quit smoking two to four weeks before they have surgery. If you’re in this situation, it’s the perfect opportunity to keep that streak going. Because quitting in advance means you will have already completed a hard part of the process, research into this topic found that as many as 30% of people who quit for surgery are able to stop smoking for good.

Although giving up smoking for good isn’t easy, if you utilize the above strategies, you will significantly boost your odds of success and even make the process far less stressful on yourself.

Michelle Agnew is a personal trainer and life coach. Prior to starting her own wellness consultancy six years ago, she picked up bad habits like smoking and not exercising during her decade in finance. After quitting and improving her own lifestyle, she’s dedicated to helping others learn that healthy and happy living is possible

Why You Should Consider Vaping Rather Than Smoking

Vaping is now the norm. It's been around 50 years since it was discovered and declared that smoking is significantly harmful to your health; there ...

How E-Cigarette and E-Liquids Are Useful?

If we focus on the real statistics of the survey conducted by a well researched magazine, online 10 to 15 percent of people know what an e-cigaret ...

Making the transition from the traditional tobacco based cigarettes to vapors is not necessarily a walk in the park. It is advised that smokers sh ...

How to Vape in Safety

Smokers the world over have long been seeking an answer to the question ‘how can I quit smoking?’ After years of using gum, lozenges, throat spray ...

The Rise of Vaping

You have probably heard of vaping and of electronic cigarettes, thanks to the fact that the e-cig industry is rapidly growing and expanding throug ...